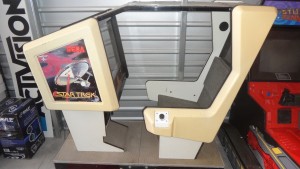 During our tour of events which included Game Developer Conference in San Francisco, CA and South By Southwest in Austin, TX, we made a few side trips to collect some very intriguing donations to the museum.

Two of the major items are arcade cabinets which will be featured in the museum’s embedded arcade. The first is a Star Trek sit-down cabinet. This beautiful vector-graphics game never looked or sounded better, but what sets this particular one apart is that its previous owner took the coin door to Star Trek conventions, and had it signed by William Shatner, Leonard Nimoy, George Takei and other cast members, making it a one-of-a-kind!

Another arcade cabinet added to the museum’s inventory is Stun Runner, a sit-down futuristic racing game. This cabinet features a prototype board which may or may not be kept with the day-to-day cabinet.

Finally, we had a Sega Pluto donated. The Pluto was to be Sega’s “Saturn plus Netlink” console and there are very few of these prototypes known to exist. This particular unit is white with the Saturn logo stickered to it. It is a model and not a working prototype, much like the Sega Neptune that has been part of our collection for a great many years.

Come Get Some: Duke Nukem II for iOS Announced